Marty Friedman was both right and wrong: J-pop idols are pretty amazing, and he emphasized this point when he enthused that “all the stuff I introduced to you from Japan is going to make it outside of Japan, and soon. I’m surprised it hasn’t happened already. I’m talking this year, or next year something is going to explode because this stuff is too good.” Four years later, we’re seeing a tiny, almost barely-perceptible fissure in the musical landscape. Perfume is successfully touring Europe and North America, adding major cities to their stops over time, while metal idols BABYMETAL are catering to both the LOLJapan crowd, and prurient hipsters, ever on the prowl for the new and different. The latter is nowhere more telling then their appearance in the entertainment issue of this week’s New Yorker, buried in the back in the teenage tastemakers article, Teenage Dream, by Matthew Trammell.

“Teen-agers with their serial rebellions, romantic infatuations, and unabashed experimentalism, have proved to be adept at reworking pop’s core provocations. Technology, meanwhile, has made it easy for teens to inject their aesthetics into the mainstream, with or without the guiding hand of managers and record labels.” (70) 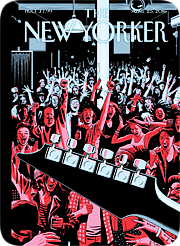 That last point is a stretch, and none of the artists briefly profiled could be considered to have gained “mainstream” success (Rappers Novelist and Kodak Black, piano prodigy Joey Alexander, popster Låpsley, etc.), but the New Yorker wouldn’t be the New Yorker if it didn’t purport to being on the absolute up-and-up. As in TIME‘s special Fall 2001 issue, which featured Hikaru Utada, (notably, she was working on her American debut with Foxy Brown and the Neptunes and planning to retire very young, around 28, probably to become a neuroscientist), articles like these tend to be peak Western exposure for said artists, rather than the beginning of a phenomenon, though BABYMETAL does get relatively considerable space. Writes Trammell,

“Though the songs are addictive, Babymetal’s sharpest asset is its singular combination of J-pop’s theatrical pageantry and metal’s primal sprint. Adherents of each genre are becoming fans: Babymetal has enjoyed huge success in Japan, and its fame is growing in the United States and in London. […] Babymetal’s act, like much of the best pop, is at once recognizable and profoundly new.” (78)

This is a singularly Western explanation; in fact, for fans of J-pop, young teenage girls dancing and singing in a genre they never heard of, or downright dislike, is nothing new, and has been done, often, if not, arguably, better, by Japanese idol groups before them. The “profoundly new” angle is only new to American pop, where metal remains the domain of a largely male demographic. This, too, was true in Japan, until a meeting of the minds pinpointed a great way to sell idols units to otaku male audiences (the, ahem, most important, ones) and their skeptical friends even quicker: by making young female idols the mouthpieces of a traditionally “masculine” genre, they created the jarring allure and unexplored juxtaposition of teenage girls belting out aggressive metal songs, and lured fans’ wallets with something they could enthuse about publicly. This opened the idol business to even more mainstream revenue: suddenly it was just a little less unseemly for young and older men alike to collect posters and photo cards, attend handshake events, and attend concerts to see their idols because the music wasn’t soft rock or bubblegum pop: it was heavy and authentic and respectable and composed by real virtuosos of the genre with immeasurable skill and talent. While the genre (here, idol pop as an all-encompassing umbrella term) has always had both male and female fans, the female fans tend to be outliers: female idols, especially those who are front women for increasingly edgier hard rock or metal music, are first and foremost catered to a male audience, most especially an older male audience, who has the buying power to keep up with the sale of related merchandise. Female fans are the superfluous extra perks, a welcome byproduct, but hardly the target, which is why you get a lot of lyrical content that is usually either a) specific to men’s interests, especially, as the market saturates, super-niche interests — see Momoiro Clover Z — or b) specific to what boys and men think girls think, talk, and daydream about.

There are very few actual female idol groups marketed to girls and women, and most of them aren’t pure idols, skirting the broader definitions that prefer terms like girl group, or dance group, like E-girls or Fairies. Female fans are steered in the direction of Johnny’s idols, where young boys and men release softer, more heartfelt, treacly pop music, the type women are typically assumed to like: photoshoots present male idols as nonthreatening, cute, and cuddly, and their singles and albums reinforce this. While a crop of new K-pop-imitators like Da-iCE and Choshinsei, are struggling to redefine the preconceived notions of idol boy bands, they are still the exception, outnumbered by their best-selling rivals. Even groups like EXILE, KAT-TUN, and lately NEWS, lean toward heavy dancepop at its most aggressive; another genre traditionally undervalued in the critical world. 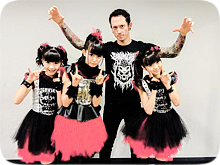 In many ways this is a sign of the outrageous gender binaries that comprise the marketing and distribution of Japanese idols; for purposes of the music itself, it also reinforces the notion that genres that comprise huge male audiences (hard rock, metal) can be deemed authentic and worthy of critical attention, while those that women enjoy are considered fluff that no one would ever take seriously. Under that idea, it’s hardly surprising that a group like BABYMETAL could make it in the circles of certain American subcultures, and less so that articles in the Western media feel the need to justify their interest in the group by constantly reminding readers that their material was written by veterans of the metal genre (Nobuki Narasaki, Herman Li, Sam Totman, Takeshi Ueda, etc.), or that the girls themselves are influenced, or appreciated by, everybody from the members of Metallica to Slayer. There are few that don’t, and in many ways, these men serve to legitimize their existence. Under these caveats, it’s hard to imagine an equivalent Japanese male group/boy band (who don’t write their own music or play instruments) could make it stateside, not even if like Jimi Hendrix came back from the dead to write an album for them. Because it seems to be acceptable, if not preferable, for women to be mostly muses and good-looking faces for the music, a group like Perfume can get a lot of critical praise because of their music producer Yasutaka Nakata, but it rarely goes the other way for boy bands, who can’t seem to catch a break unless they’re more in control of their music and image, for example G-Dragon of K-pop group BIG BANG.

Setting aside the gender breakdown of the critical music sphere for a second, any writer putting together an article about BABYMETAL deserves applause, since nothing gives away their idol-ness more than an interview, where stock quips and rehearsed nothings are the order of the day. Says Moa Kikuchi, when asked about the international reach of their fans, “Everyone loves music. I think music is the common language of the world. Music is a wonderful connection for all people – it brings people together.” These are hardly the insights of seasoned performers, though it speaks to their unique perspective, both as teenagers and Japanese teens, which they are very quick to take pride in (Yui Mizuno: “BABYMETAL music is a blend of hard music and metal music with Japanese pop and sounds. If we were not from Japan, we’d be a totally different band with totally different fans”).

While Marty Friedman believed that Japanese pop music would only reach an audience outside Japan “with luck” and “timing,” and other factors that couldn’t be planned, BABYMETAL, has been a slow, methodical climb to relevance, not least of which included shows in Paris, New York, and the UK, and opening for Lady Gaga’s ArtRave: The Artpop Ball tour starting back in 2014. Noisey did a brief introduction back in the same year, while Jake Cleland at Pitchfork picked “Gimme Choco!!” as one of his favorite tracks of 2010-2014. All said and done, BABYMETAL, originally conceived of as a subunit of uber-traditional idol group Sakura Gakuin, has done well for itself, and not just because of luck and timing.

In fact, idol groups like BABYMETAL flourish in Japan, many of them far superior to the group, who are getting the attention and accolades that many Japanese idols simply don’t care about, or can’t be bothered with. PASSPO☆, in particular, has some of the highest quality, and variety, of hard rock and metal on their albums, especially on the legendary One World, and last year’s Beef or Chicken? Other examples include BAND-MAID, Momoiro Clover Z, and BiSH, all bands that might be considered too niche to crossover in America (it would surely involve a lot of context and explanation).

That being said, in rare cases the music can transcend context, as BABYMETAL’s fantastic new album, METAL RESISTANCE, does. There are some truly epic and astounding risks the album takes and pulls off, particularly with lead tracks “KARATE” and the mostly-instrumental “From Dusk Till’ Dawn.” As Ryotaro Aoki points out in his review, the album has “more nods to 1980s hair metal and symphonic metal, which are perhaps more suited for mixing with J-pop than metal’s edgier subgenres” and fulfills “the crux of idol music; they know what you like, and they can convincingly make it exactly the way you like it.” It will be interesting to see how long BABYMETAL can sustain their novelty act in a country where trends come and go, Japanese pop culture is not often taken seriously, and the majority reaction is still more laugh-at-them than laugh-with-them (to be fair, homegrown girl groups aren’t having it much easier, even as they look to edgy K-pop for inspiration, but Fifth Harmony and Little Mix, bless their souls, are trying). While seeing the girls on Stephen Colbert was pretty exciting, simply appearing on late night portends nothing; just ask Girls’ Generation. The goal is always that music from other parts of the world can be appreciated and enjoyed for what it is and what it’s trying to do, rather than fit a predetermined, acceptable mold, regardless of which audience it’s attracting and why, and at least in that sense, BABYMETAL are chipping away at America’s icy heart proudly, and on their own terms.

8 thoughts on “Some luck, but mostly effort: The anomaly and allure of BABYMETAL”