Although its exact origins are still up for debate, the term “J-pop” didn’t make its debut until 1988, right around the time the bubble economy burst, ushering in a different kind of decade highly relative to the open consumerism that defined much of the 80s. Before then, various labels were thrown around to capture the anomalies between traditional Japanese music and its more Western-influenced chart-pop, including New Music and a little later, City Pop. While New Music was a mix of Japanese popular forms with an “urban contemporary” mix, City Pop erased much of the Japanese influence and highlighted synths with all matter of popular “urban” styles, such as jazz, adult contemporary, R&B, and even big band.

City Pop is making something of a revival in the past couple years (emphasis on something), marked by albums like Greeen Linez’s Things That Fade and domestic artists like Hitomitoi and YYSHID. In a recent profile of the style, The Japan Times says City Pop “blends soul music, fusion and adult-oriented rock (AOR) with lyrics that center on city life as it often was experienced during the country’s bubble economy,” a point Michael Bourdaghs takes further in Sayonara Amerika, Sayonara Nippon to describe the vibe of the 80s in big cities like Tokyo: “The Japanese economy is surging to unprecedented heights, driven by a speculative bubble that brought with it conspicuous consumption on a world historical scale… Media culture reacts as well: the new consumerism can be seen in the cheerful hit songs of the Southern All Stars celebrating summer vacation and life at the beach” (198). City Pop artists in the 80s included vocalists like Miki Imai and Momoko Kikuchi, whose album ADVENTURE released in 1986 defines the genre by checking off all of the stylistic boxes without neglecting the importance of ambient jacket art featuring an extravagant private jet.

While the number of artists who dabbled in City Pop during the decade are too numerous to consider individually, it’s still peculiar to witness the genre crop up in contemporary artists: while nostalgia might be an apt explanation for any revival, City Pop hasn’t yet accrued enough of a following to count as a proper revival. And though City Pop eventually petered out when the bubble burst, it was almost instantly picked up by Shibuya-kei, which took the same themes of leisure and excess spending to new heights by incorporating 60’s Continental jetset culture with playboy romanticism. In a sense, while the genre itself became unidentifiable, the sentiment still loomed in a different form. City Pop also captures something of a fascinating paradox in values, at once espousing an urban lifestyle while longing for beach side resorts and tropical climates, the kind of conventions taken for granted by those that can afford to get away from the city for a while and long for simpler things for which they are willing to spend top dollar. If there were such a thing as yuppies in Japan, you’d find them jamming to Piper’s “RIDE ON SEASIDE.” 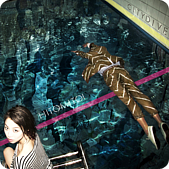 As such, Hitomitoi’s new album City Dive doesn’t deliver anything novel, rather it indulges in these tropes with a gentle pinch of irony, with perhaps its most charming characteristic being the ability to appear sincere despite its acknowledged label as a “concept album” — its dead giveaway is the (purposefully?) awful Photoshopped cover art. As far as covering the bases, the album is no stranger to excess: there are two song titles alone that reference summer and two others that hint at bodies of water. Maybe problematically, City Dive only recognizes its vapidity enough to render the album smart rather than simple musical indulgence, though bereft of its historical context, it accomplishes what the best radio-pop does: toes the line between sonic wallpaper and genuine significance.

After all, despite City Pop’s place in music history, it wasn’t the only genre popular in Japan during the 80s: punk rock was gaining notoriety thanks to bands like The Blue Hearts, metal was never far from the public eye, and idol pop was still the biggest cash cow most likely to appear on music programs and the front displays of record shops. But where there are kids with too much spending money, there will always be a music culture that reflects their discriminating tastes.

8 thoughts on “Don’t call it a comeback: Japanese City Pop”