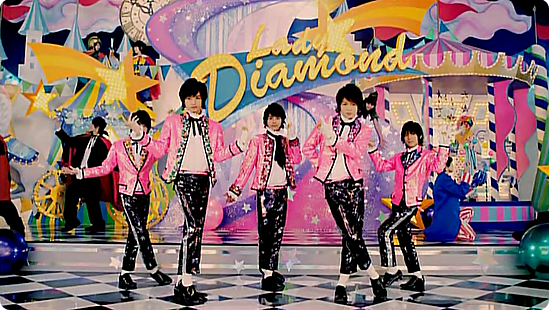 Japanese pop culture is all about cute, and their teams of double digit group members are as old as Onyanko Club. If you’re at all familiar with idols, you’re probably used to seeing girls act like they’re nine years old, even when they’re closer to nineteen. Unfortunately, sometimes less attention is paid to their equally problematic male counterparts, the stuff you’ll usually find coming out of the Johnny’s factory.

One of the talent agency’s newest idol groups, Sexy Zone, consists of five underage male members: you might have skipped over their newest single on a torrent or rar blog, blinded by the awful photoshopped cover. A quick look at their Wikipedia page provides the most terrifying information you will ever find in a bullet point: 100-year old Johnny & Associates founder Johnny Kitagawa says, “The group name came from Michael Jackson’s sexiness.” Which…so. The same article speaks of the group being one of the youngest at Johnny’s since Hey! Say! JUMP (the youngest member is eleven and the oldest seventeen), as well as the use of “sexy roses” at their debut, making you wonder if Kitagawa doesn’t know the definition of “sexy” or if he’s just trolling hard.

What it seems Kitagawa does is create commercially successful scenarios that require the viewer to acknowledge a twelve year old’s relationship to sex, a necessity brought on by nothing more than the group’s name. He did the same thing in ’97 with KinKi Kids, a pun on the Honshu area the group members come from. It’s easy to disassociate the two on the surface because Sexy Zone’s promotional videos are unusually typical, a space to explore Japan’s relationship with cute in the same way a Berryz Kobou video does. For example, in Sexy Zone’s newest video for “Lady DIAMOND,” the boys are dressed in pink sequin blazers and striped trousers from Michael Jackson’s “Billy Jean” era on a stage made of diamonds, glitter, and stars (hopes and dreams implied). Without a hint of anything that made Jackson’s stage persona legendary, it’s much more conceivable to argue that the video is just an amalgamation of bad taste, rather than anywhere near sexy.

As Never Ending Music Power points out: “I think I have come to the point where I am just ignoring the whole “sexy” theme for this group as I just cannot see something that is so adorable as sexy in anyway [sic]. Sure Nakaken and Fuma can pull off the sexy part but the other three are cute-zoned for me until they start closing in on 18 years old at least.” Even fans are ignoring the failed “sexy” concept and clinging to the kawaii. Furthermore, unlike an abundant number of other groups, it can be argued that Sexy Zone is largely a failure of semantics. While South Koreans are learning perfect English at an astonishing rate, the Japanese are still falling behind due to a number of factors including the tendency to use English decoratively or more as punctuation marks, often at the expense of correct grammar. Where the Engrish phenomenon was born, we get band names like w-inds., Kiss-My-Ft2, Hey! Say! JUMP, and, well, Sexy Zone. This doesn’t necessarily mean that the entertainment company is pushing an agenda, but more that “sexy” here seems to be striving for “cool,” “glamorous,” and “appealing” (none of which it nails).

Even so, it’s difficult when you have a seventeen year old lumped in with a twelve year old as if the ages are inclusive. A seventeen year old dancing among much younger children in the same vein as 2011’s runaway hit “Maru Maru Mori Mori!” doesn’t exactly exempt the group from fetishizing adolescence. While certainly not all Japanese groups are like Sexy Zone, it does help explain some of the appeal of K-pop, where groups like 2NE1 are allowed to have dynamic and evolving personalities while acting like the young women that they are. The Hallyu wave has given Japan something of a difficult task in embracing this new attitude while trying to keep what makes the country’s popular music culture so unique. The emergence of groups like Fairies, that try to keep the flavor of Watarirouka Hashiritai 7 by sending conflicting messages about girlhood while combining the blunt mannerisms of a K-pop dance routine, illustrate the country’s attempt to cash-in on a trend without compromising the number of thirteen and fifteen year old talents. But whether this is a sign of old school agencies like Johnny’s dying out, or simply one shot fads, will remain a defining question for Japan as the country adjusts to the reality of musical inertia.

6 thoughts on “Sexy Zone: This isn’t it”